To celebrate the Chinese New Year—The Year of the Water Dragon – the Mah Jongg group had  a Pot Luck Supper on Sunday, January  22nd.   Nineteen  players attended  the evening and played the game before the supper.   A great time was had by all!!

note:  Use the arrows in any picture enlargements to scroll through the gallery. 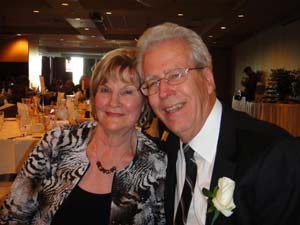 Jane & Murray’s comments:   “WHAT A SHOCKING SURPRISE!!!      What  a  humbling experience to be a 2012 Golden Brush Award winner.   We do spend many happy hours  sharing  time in this  friendly  community  and  meeting  so many interesting folks from around the world.

We, at the Centre, are also very fortunate to have Murray and Jane, as they have  encouraged members new and old to take part in our many activities, hence our increased membership numbers. 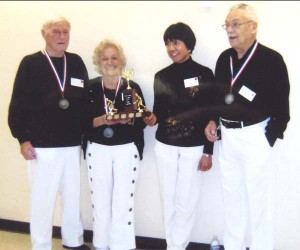 The Chemainus team of Alan Knight, Lois Haas, Lawan Mason and Ken Elstone, came second in the tournament.   The gold was won by the Kopy Kats from Houston, B.C., and the Chemainus Team were happy with the silver, and the nice Second Place trophy.

A most interesting show of the kinds of arts and crafts our members do in their spare time! What a variety of exhibits, and very professional, too. Unfortunately, there were a number of events on that weekend and the viewing numbers were a bit disappointing, but it is an event which would be worth putting on again in the winter months perhaps in a year or two? It was a huge effort to bring in these exhibits, but we hope that it has encouraged some of our members to start some new hobbies. Upstairs there were demonstrations of Mah Jongg, Computer help by Sheila Taylor, Bridge and Cribbage.

(our own Jean Morrison and George Robson!!)    They arrived in the park by horse and buggy in style, and were welcomed by three ceremonial trumpets. The Red Hat Ladies, and some beautifully dressed ladies in period costume were present.    The Chemainus Valley Cultural Arts Society supplied tea and fancy cakes to all those present, and the Cowichan Valley Concert Band performed in the bandshell with a variety of music, which was much appreciated.